been meaning to get this out sooner. here is an audio version. hope you enjoy it. leave me some feedback!

*** so the story behind this poem is a tv add run by Latinos for Reform and the fact that my mother had recently become a US Citizen. i decided to speak on the matter.***

NOTE: THERE IS A SMALL CHANGE FROM THE POEM TO THE AUDIO.


A MAN IN NEVADA

there is a man
in Nevada
that wants my mother not to vote.
that tells her that her voice doesn’t count.
that her calloused hands
that are soft to the touch
and rough to the rest of the world
dont matter.

this is the woman.
who’s 4 ft frame
somehow hides the 10 ft person
she really is.
and i know
cuz i’ve seen her shadow
mix in with those
who marched down the capitol of St. Paul.
down the avenues of Arizona.
to prove that her voice won’t be silent.
that her invest in her family will not be forgotten.

this is the woman who traveled thousands of miles,
swallowed her pride and crossed borders in exchange for college degrees.
to arrive to a land where the door never opened her way,
where shit wasn't free.

where she was shun for her dialect.
where MN Nice lacked respect.
where the ice on the sidewalk
reflected an image never seen by her
and yet she pushed on.

through the waves of assimilation
with heavy doses of depression
medications and a fuckin wooden spoon.
to raise 2 babies
so one day, they could vote with her.


there is a man
in Nevada
that wants my wife not to vote.
that tells her voice doesn't matter.
that change does not fuckin' matter.
that the thousands of hours she spent away from her babies
while working on getting her education don't mean shit.

this woman was the first from her family to graduate from high school.
she fuckin dominated college!
in a place where the bronze skin
faded with the cold winters.

she accomplished things no one in her family did before
opened and kicked down doors
for her daughters and others born
A legacy she leaves with every step she takes.
A Dream that Acts with every breath she takes.
A vote for change with every word (every baby) she makes.
A scream against the inequalities with every vote she casts.

A woman, like my mother that taught me that without struggle there is no hope.

so don’t you dare fuckin' tell me that what they think does not matter.

it matters to me, our children, our community.

and if god wants to prove me to that she is real.

She will make this Man from Nevada run into these ladies in a dark alley in Vegas and my $$ will always be on the (sun) brown goddesses.


Man in Nevada by rscspokenword
Posted by Rodrigo Sanchez-Chavarria at 2:09 AM

I'll put my money with her too!

This is great, Rodrigo. I'm so heartened to know that we have political, feminist poetries coming into the world.

Right now, I'm not posting any poetry over at MN Mic, but I love this, and if I do post poetry over there again, this'll definitely be among them. Work this up. I want to see it on stage.
-Inky 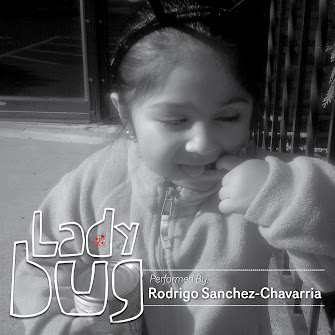 Rodrigo Sanchez-Chavarria
I am a proud father, Poet, Spoken word artist born and raised in Peru. i call Minnesota my home. i write about my experiences, about my life.